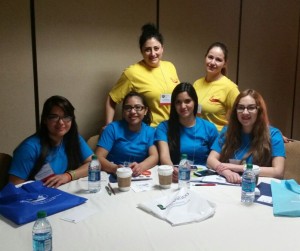 Students and chaperones from CAS Douglas pose for a group photo at leadership conference.

The theme centered around helping students become encouraged to speak their opinions and to exercise leadership within their schools and local communities.  There was a reception and dinner on the first night.  Main speakers and breakout sessions continued on Saturday with a Comic Festival at the end of the day. The students learned a lot about student leadership and activism and had a great time.