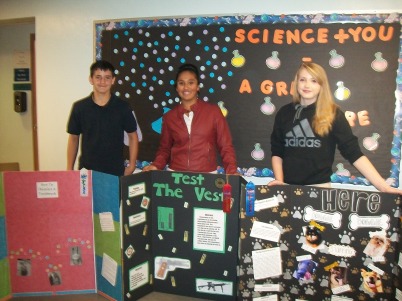 Seventh and eighth grade students at The Center for Academic Success participated in a science fair on February 6 in the cafeteria. CAS holds a science fair every year; this year there were around 57 students who entered. Windy Petit, middle school science teacher, helped organize the fair and Angelica Brown, high school science teacher, Meredith Galloway, assistant principal, and Romilly Gardner, third grade teacher, acted as judges during the event.

According to the YES Fair Rule Book, the YES Fair is “an organized exhibit of student projects in the areas of science, research, technology, mathematics, and engineering. The YES Fair is affiliated with the International Science and Engineering Fair and follows its rules and guidelines.” The YES Fair will be held at the end of March at the Windemere Hotel and Conference Center.

Students were required to include a hypothesis, materials, procedures, data/observations, results, a graph of their results, conclusions, applications and future research, a bibliography and acknowledgements on their poster boards which were displayed at the fair. All of these things played a role in the judging process.

Petit said, “[The science fair is] to get the students involved with learning and finding out new things that they can.”

The Center for Academic Success celebrated the Christmas season with plenty of fun surrounding the holiday in addition to high-quality learning activities. Students in the k-4 elementary held a Polar Party blowout in which students decorated sugar cookies, played pin the ornament on the tree (similar to pin the tail on the donkey), and molded indoor snowmen from “magic” Arizona snow [see photo left]. 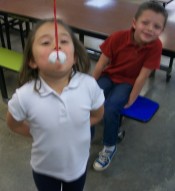 Students also raced to eat sugared donuts off a string and worked with art teacher Ms. Marshall to create reindeer clothespin ornaments. At the culmination, students selected three different reindeer snack mixes to take along to view the classic cartoon — The Grinch.

Fourth grade classes also performed a winter musical in which Santa decided that kids no longer found him “hip.” Santa then decides to transform into “The Clause” as he proclaims the entire north pole to change into a 1950’s-style workshop. Dual Santas, Mrs. Clauses, and elves set the fun stage for this drama as Santa learns that children still love their holiday traditions. In addition to memorizing all their lines, fourth graders also sang and danced to classic Christmas carols such as “Jingle Bells,” and “Here Comes Santa Clause” in addition to 1950’s classics like “Blue Suede Shoes” and “Rock Around the Clock.”

Many thanks to both the fourth grade class and Music Teacher Ms. Dokken who made this ambitious musical possible.

CAS also involved family and world-heritage traditions in its holiday celebrations with many classrooms decorating gingerbread houses, researching Christmas around the world, and explaining family food and gift traditions. Classes learned the stories of Father Christmas, Saint Nicolas, and the story of The Magi which have transformed over the years into holiday gift-giving. Although not every CAS family celebrates Christmas, those with differing traditions were able to explain holidays like Winter Solstice, Hanukkah, and Kwanza to their classmates. Several students who do not observe holidays also shared their family traditions and beliefs for this time of year.

Whatever your family traditions, CAS offers you and yours a very Merry Christmas and time of joy this holiday season as we reflect on the year. CAS will observe a half-day with a 12:00 release on Friday, December 19th and will be closed for the holidays for two weeks. Classes will resume on Monday, January 5th, 2015.

The Center for Academic Success held a short flagpole memorial ceremony in honor of the American tragedy of September 11th. Middle and high school students with staff met Dean of Students Jarad Young at the CAS flag pole for a few words on the importance of honoring the fallen and remembering the anniversary each year of the attacks.

Students and staff had a somber raising of the flag to half-mast in silence followed by a salute and pledge. On this day, and all days, CAS is proud to serve our families who work to protect our freedoms in the armed forces and employ so many veterans on our staff.

Students will continue to remember the day at CAS with moments of silence and readings about the 9/11 events which took 3,000 American lives 13 years ago.

The Center for Academic Success announces its intention to submit applications for the 2015 21st Century Community Learning Center Grant for its elementary school sites in Sierra Vista and Douglas, Arizona.  These schools have received 21st CCLC grants for the past five years and have successfully operated community learning center programs with these funds, benefitting hundreds of students with quality before and after school programs and summer programs, free of charge.