Why I Love CAS

In summer 2013, I had just wrapped up a year being online schooled by K12.  I thoroughly hated that school year, and I knew I was ready to go back to a physical school.

My mom allowed me to have a say in the school I’d choose.  In the end, I was simply left with a choice between CAS and Town and Country, which is within reasonable walking distance of my home.  I had no idea what either school would be like.  At my first school, I only heard bad things about CAS.  I had friends at Town and Country, which made me want to go there even more.

In frustration, I went to the CAS website, confronted with this difficult decision.  As I read about the offerings, I heard a voice in my head as I read, telling me, “Choose CAS.”  With newfound confidence, I told my mom, “I choose CAS.”

In August, I knew nobody.  I felt so lonely… until I noticed a familiar face in my classroom.  She was Jakia Davis, a friend of mine from fourth grade.  Speaking of the classroom, one thing that caught my eye was the size of the classes.  Compared to other schools, we have small classes.  My class has 13 students only (out of 28 eighth graders)!  Anyway, I made my first friend at CAS (Tino Llanes-Gibbs) on the very first day!  Friends often outnumber bullies at CAS.  Not, to say there are none, but few compared to other schools.

At CAS was my introduction to the Scripps National Spelling Bee.  I used to think it was just for super-smart kids… until I made it to the state level.  One of my main motivations was our school’s motto, “Higher Standards; Higher Expectations.”  Everyone at my school takes the motto seriously, including me.

Even now, I am headed to the 2016 County Spelling Bee, having secured a third victory at the school level.

CAS has inspired me to do great things.  Although I have plenty of friends attending JCMS, I never regret my decision.

What makes CAS such a good school? This is what I asked myself when I first came to this school about 4 years ago. Keyauntay Gardner is my name and I am in 7th grade. As I’ve gone through my school years at CAS I realized that it’s better here than the other schools I’ve been to. This school provides free food, after care, and many other things that you don’t have to pay for. Some kids might complain about silly things like someone bothering them or other small things. I want you to realize yourself that you have it made here at CAS! 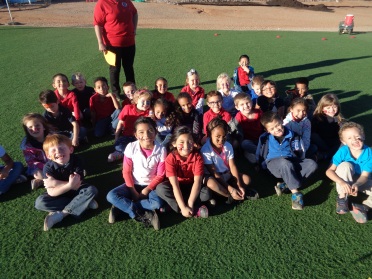 Students show off their biggest smiles and their school pride

I’ve gone around school and asked administration and staff about what makes this school different from other ones. Mr. Loucks and I talked about why our school is better than other public schools. During this talk I realized that I really didn’t need to ask what makes our school a good one—it is obvious. CAS is more organized than every school I’ve been to so far and on top of that, this is the only school where I feel like I can call others around me family. Most importantly, CAS has teachers who really care about you and want to help you. 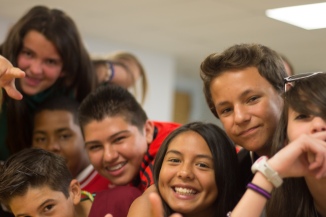 A group of middle school friends pose for a photo

The last person we interviewed was Ms. Garza. Ms. Garza has been here since CAS first opened and even helped build some of the desks you sit in today. Ms. Garza told us that she really loves the staff and sees the whole school as her family. Seeing her old students grow up fills her with joy but, it is hard for her to let go of her students once they have grown up. Just from her comments you can see there are people here, like Ms. Garza, who really care about you and want to help you succeed in life. I’ve been to schools where the teachers just work to work and students are not their first priority. Here at CAS students are always the first priority and the most important thing to the teachers.

Over all, CAS is loving, organized, has a staff full of people who care, and provides students with almost everything for free. You go to a great school; respect it and take care of it because the people here are the ones helping you plan the future.

For more stories like this, check out the CAS Chronicle on our Sierra Vista Campus page.

The May edition of the high school newspaper, The CAS Chronicle, is now available both at school and online. Click on the link here to read it or any of the other spring editions of the CAS newspaper. Thanks to the newspaper staff and advisor, Ms. Sarah Burton, for doing an excellent job with the paper this year.